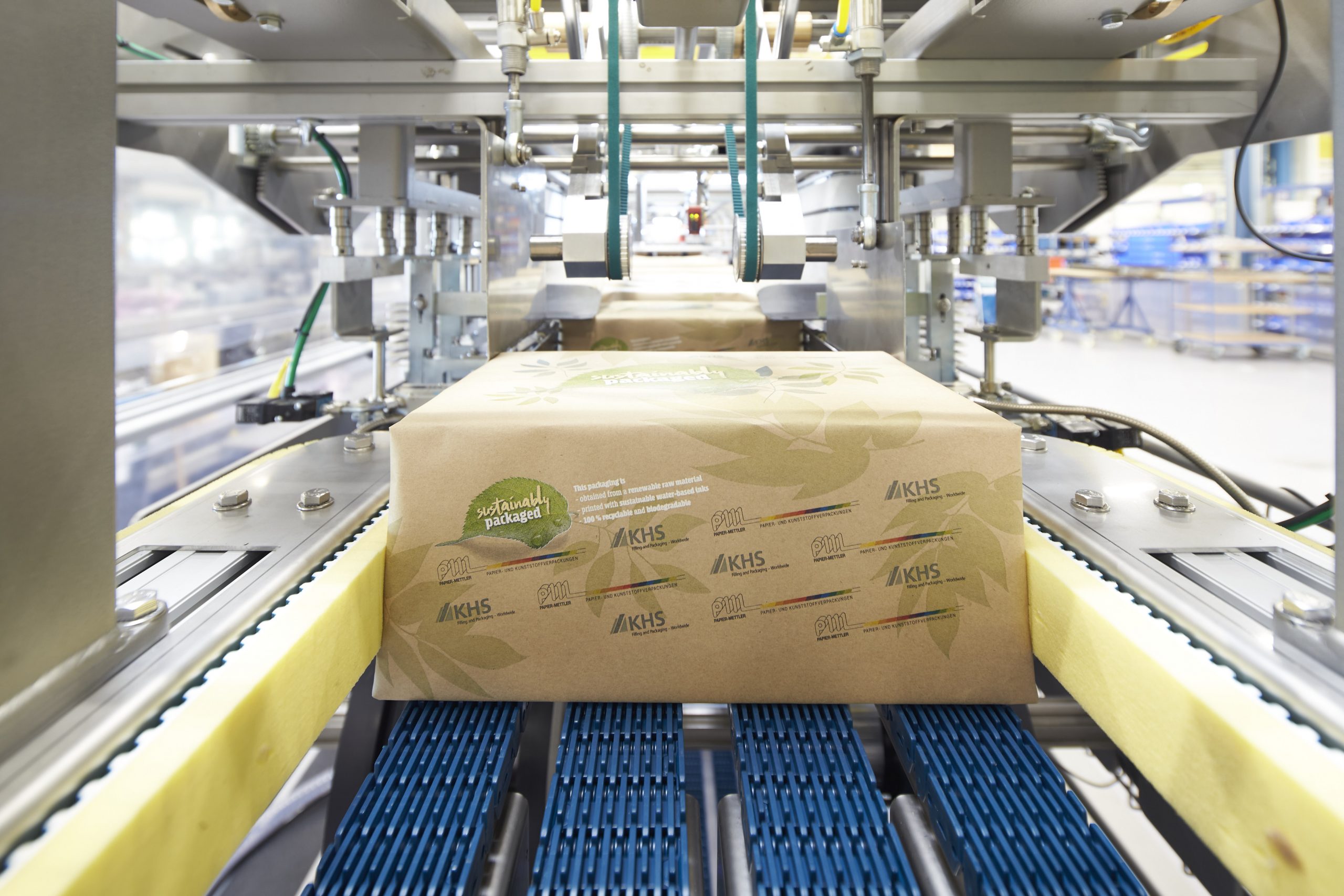 A new first in secondary packaging

The latest technology developed by systems supplier KHS, means that cans of food as well as beverages can both be successfully wrapped in paper. This offers a perfect alternative to film or wrap-around cardboard and offers many other advantages.

Benefiting from this new, eco-friendly technology is KHS’s well-known Innopack Kisters tray system. Other key benefits apart from being eco-friendly and energy saving, include lower raw material costs, with only minor adjustments required for conversion to the new set-up. Regarding its stability, the results are the same if not better than those compared to cardboard or film-based wrappers.

However, at KHS the idea of using paper as a secondary packaging material is not a new one. The company first experimented with this concept around 20 years ago. Karl Heinz Klumpe, packaging product manager at KHS told SPN, “Back then, this technology didn’t catch on, as paper was a cost-intensive raw material and wrapping containers in film yielded better results regarding stability. The beverage industry thus opted for different systems and solutions to those available today. Currently our customers want green alternatives to the usual packaging systems such as film and these should be as eco-friendly as possible.”

In order to achieve this, new paper wrapping material has now been developed together with an international beverage producer. This type of pack can replace shrink film or wrap-around carton packaging for transportation or sale, on packs of 12 or 24 cans in the high-capacity range of up to 90,000 cans per hour.

In order to wrap cans in paper instead of film just a few adjustments are needed to the Innopack Kisters tray packer. “KHS is increasingly supplying modular systems and solutions that enable and ease the appropriate conversions to our machines. In this case, we’ve simply reengineered the process module for folding and wrapping,” Klumpe explains.

“The standard components such as tray separation from the magazine, gluing or can-feed are identical to those on the hundreds of proven KHS machines already on the market.” This allows beverage producers to have the tray packers already in operation at their plants converted simply by adapting certain modules, making a full new investment unnecessary.

Wrapping cans in paper has many advantages over other materials, believes Klumpe: “On the one hand, paper is kinder to the environment than film with respect to ocean pollution, for instance.” On the other hand, fewer packaging materials are used. Instead of a sturdy wrap-around carton or film packs on trays, packaging cans in thinner paper only needs a flat, stable corrugated card pad as a base – with identical results regarding stability. Costs are also cut by the new paper pack: compared to a wrap-around carton by up to 15%, with outgoings about the same as for film. Overheads are also considerably reduced by the low energy consumption of about 14 kWh an hour at 80 cycles a minute. The folding process is such that the pack is also fully enclosed.

Savings and efficiency all wrapped up

Klumpe sees huge potential for the new KHS technology. “When I think how much food is canned all over the world, with our paper pack we offer a useful alternative to conventional secondary packaging. With our system we can significantly help to cut down on the amount of plastic waste being generated.” According to Klumpe, this will support the efforts being made throughout the entire sector to protect the environment. “Sustainability is also always a cost factor, however. With our new approach we’re catering for both aspects here.”

The KHS Group is one of the world’s leading manufacturers of filling and packaging systems for the beverage and liquid food industries. The KHS Group includes the parent company KHS GmbH, KHS Corpoplast GmbH and numerous subsidiaries outside Germany, which are located in India, the USA, Mexico, Brazil and China. KHS manufactures modern filling and packaging systems for the high-capacity range of products at its five state-of-the-art production facilities in Germany. Today the KHS Group is a wholly owned subsidiary of the SDAX-listed Salzgitter AG Corporation. In 2019 the KHS Group and its 5,149 employees achieved a turnover of almost €1.3 billion.

(Pictures and captions courtesy of the KHS Group)